Another Day in Paradise

I woke up at 6:00, 6:15, 6:30--you don't have to be a math whiz to figure out the pattern here. It wasn't a restless night; in fact, since I've been on break from school, I've been sleeping pretty well. It's my boyfriend. He sets his alarms to start going off at 6 a.m.--then he got up sometime after 7. This is a typical pattern when I'm up here--the alarms commence their incessant buzzing and beeping, and I try to figure out how to shut them off and eventually give up and rouse him to do it. Usually, I snooze after he leaves, but this morning, I got up with him, too: the time is already getting close to when I need to leave this place and go back to the Cities, where work, my mom, a house, and friends await.

Though the temperature was somewhere between 13 below and 1 above (accounts varied by weather site), I spent some time outside to see the sun rise and get my head around what I wanted/needed to accomplish today. I need to read some more of a book I'll assign my 9th grade classes (haven't read it--and feel bad that I assigned it; so far, A Separate Peace is very lackluster). I need to bake more zucchini bread (I made 3 loaves, but Roger has polished off one and a half of those, with a little help from me--I need to make more so he can give a loaf to people whom he's promised.) I want/need to bead some more jewelry for Sharon's give-away, which will come up all-too-soon.) I need to call my mom, who keeps forgetting that even when I'm in NoDak, I can still receive phone calls that aren't long-distance. I also want to make another good dinner for Roger so he gets back to eating well and not whatever, whenever. I guess I've got a full day ahead of me.

One of my not-so-new New Year's resolutions is to write more. Since I am a high school English teacher by vocation, I read a lot of students' writing--which is a good and bad thing. The worst part of it is that it leaves me little time to settle into my own writing. So I want to write at least one blog each week, even when I'm on the road.

So far, this one is pretty boring. Maybe they all are--I don't know. If you're still reading this, thank you--your perseverance is commendable, your support of my efforts to seduce the muse (via blogging) are charming. I'll stop before the cranial doldrums set in for you--I gotta get crackin', anyway. Love your friends, love your nemeses more...chances are good that they need more love.

When Pigs Fly in Calfornia

I've been thinking about my brother a lot lately. Missing him. I always associate this holiday season--the time between Thanksgiving and Christmas--with him; maybe it's because we had our own tradition of breaking the turkey's wishbone. One day, he even showed me how to cheat to always get the larger hunk of the bone...but even with that, I still never won.

Today, I'm also thinking of my October sojourn to California...probably because last night I was telling a friend a little about my recent venture out west, and then I dreamt of driving along the 1 and seeing a beautiful huge eagle with a brilliant white head. But that's all I remember about that dream.

As I was driving back to LAX from Santa Barbara on my last day in CA, I ate breakfast at the first and last remaining Sambo's Restaurant in Santa Barbara and proceeded to drive towards LA. I wanted to stay on the Pacific Coast Highway (the 1), but somehow lost my way for a bit in Port Hueneme, an industrial town. Typical fuckin' Kate...too busy looking around at the scenery to follow the signs. However, thanks to a friendly liquor store owner, I quickly got back on the 1 and followed it through Malibu. I still wasn't ready to get back on that crazy 405 freeway, so I took the Topanga Canyon Road. Topanga Canyon is beautiful to me--maybe something about the artsy-fartsy, hippie vibe draws me to it, too. It's wedged between Malibu and Hollywood, which I've always thought was interesting--it's almost like an artist-hippie buffer between the gloss of Hollywood and the richies in Malibu. Peacekeepers? Though it's a winding road that cuts from the 1 to the 101 freeway, it's peaceful. There isn't a ton of traffic on it. It's only got two lanes. The houses aren't pressed up against the road in most places. You can still feel the vibe of nature there emanating from the trees at the road's shoulders, despite the proximity to the city.

So I'm driving along, feeling a little blue because I have to leave California but also grateful that I was able to visit her again, and I see this: 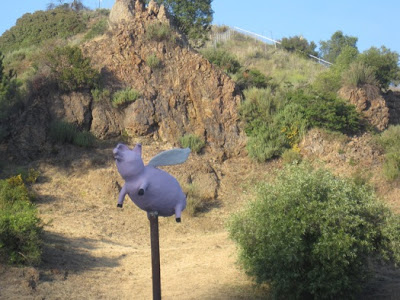 A flying pig. My brother and sister-in-law's private joke that we all  associate with my brother. This vision slays me, and I begin to sob as I'm trying to navigate the winding roads and narrow shoulders and feeling guilty because I've slowed down to accommodate my weeping and cars are beginning to accumulate behind me but there is nowhere to pull over. In retrospect, this situation is funny to me--but at the time, not so much. Finally, an oasis appears, and it's no mirage: the Topanga Canyon Overlook, from which you can see the impending doom of cityscape. 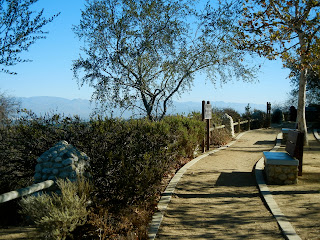 It is here where I offer the remainder of my tobacco to the earth, grandfathers, trees, wind, animals, and sky. I feel gratitude afterwards; I was blessed to be able to go to California, and I will be blessed again to return to California the next summer to hike in the mountains, walk along the beach and listen to the ocean, to sleep under the stars while the canyon winds murmur a lullaby. Hopefully, my boyfriend will also be able to accompany me so I can share with him this place to which I refer to as "the epicenter of my soul."

Thank you for reading this. I hope you're having a good day!
Posted by Unknown at 2:35 PM No comments: